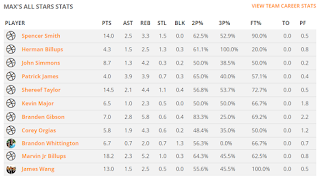 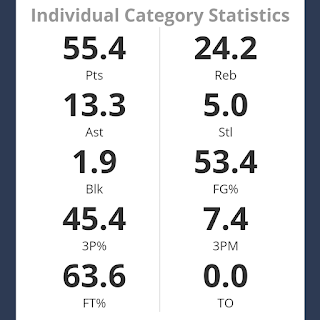 Posted by Max Margulis at 11:35 PM No comments:

Last night, Max's All Stars won the Spring 2017 NYC Basketball League Allen Street Division Championship Game at Barclays Center, defeating Smith n Berg by a final score of 50-49. Max's All Stars started off sluggish in the first half, falling behind by 11 points at halftime and trailing by as much as 15 in the second half - but there is no quit in our team. We kept chipping away until we took our first lead of the entire game in final two minutes on a pair of clutch free throws by Spencer Smith. However, Smith n Berg tied it back up and in the final seconds Marvin Billups Jr was fouled and calmly sank a free throw to give Max's All Stars the lead for good with 1.7 seconds remaining on the clock. Smith n Berg's Hail Mary half-court heave attempt failed and Max's All Stars was crowned champions again! Branden Gibson, Corey Orgias, Herman Billups, John Simmons, Kevin Major, Marvin Billups Jr, Patrick James, Shereef Taylor, Spencer Smith and Troy Whittington all worked hard and played together to earn the victory. They overcame some extremely questionable officiating and injuries, but kept fighting. Everyone contributed all season long and grinded it out in this championship game. It wasn't easy and guys had to make sacrifices, but we accomplished our goal. Special shout out to James Wang. His performance in the semifinals helped get us to Barclays and we wish he was with us last night. Also, thank you to all our supporters throughout the season and everyone who showed us love at our games. You guys are the best!

Posted by Max Margulis at 11:09 PM No comments: