Max's All Stars lost in the Watson Classic semifinals against Man Up Inc by a final score of 95-81. However, the game was much closer than the final score indicates. Max's All Stars were tied at 81 all with about 5 minutes remaining before they ran out of gas, allowing Man Up Inc to close the game out on a 14-0 run. Down by as many as 16 points in the first half, Max's All Stars did not quit. They kept fighting and clawing to keep their season alive, but it was not meant to be. A combination of fatigue and poor officiating deflated the team down the stretch and led to a difficult loss. Branden Gibson, Corey Orgias, Darryl "Truck" Bryant, Doug Herring, Kevin Pegram, Rob Thomas and Stefan Bonneau battled all game long, but could not hang on. Max's All Stars finish the summer with a 3-5 record at Watson (9-8 overall).
Thanks to Carl Gibson, Patrick James, John Simmons, Kevin Young, Kevin Johnson, Shayla Diaz, Samy Molina and Kevin Jones for coming out to support the team today as well. You guys make Max's All Stars special. Thank you guys for everything!
Posted by Max Margulis at 12:33 AM No comments:

Max's All Stars advanced to the Watson Classic semifinals today with an incredible win against Sean Bell by the final score of 89-78. Missing many key players, Max's All Stars had to call upon last minute fill-in players - DeParis Banks, Shaun Diaz and Travis Wright - to go along with Darryl "Truck" Bryant, Doug Herring and Rob Thomas against one of the best teams in NYC. However, Max's All Stars were undaunted by the defending champions. Down by 11 points in the 2nd quarter, Max's All Stars battled back to tie the score at halftime, 41-41. Down by six points in the fourth quarter, Max's All Stars kept fighting, taking a double-digit lead late and never looking back to secure the huge victory! Shout out to Kevin Young and Carl Gibson for their help on the sidelines. Also, many thanks to our supporters - Shayla Diaz, Janina Martinez and Rich Fields. Thank you guys for coming out today and showing love! 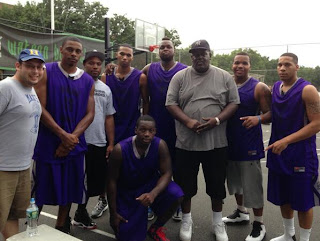 Posted by Max Margulis at 11:53 PM No comments:

Posted by Max Margulis at 11:45 PM No comments:

Max's All Stars lost in the West 4th Street playoffs against Diamond by a final score of 109-99. The team got off to a slow start - struggling to score, turning the ball over and allowing too many easy layups. The officiating didn't help much either. Down by as many as 20 points at times, Branden Gibson, Corey Orgias, Darryl "Truck" Bryant, Dave Seagers, Doug Herring, Marvin Billups Jr, Patrick James and Rob Thomas battled through injuries and kept fighting. Unfortunately, it was too little too late and Max's All Stars were eliminated, finishing with a 6-3 record at West 4th.
Posted by Max Margulis at 11:28 PM No comments: