Max's All Stars bounced back last night, winning by a final score of 85-67 against Team #2 - Eric Faltraco (tying them for first place). With only five players, Max's All Stars jumped out to a fast start, leading by 8 midway through the first half. However, Team #2 battled back and went up by two points at halftime. In the second half, Max's All Stars settled down defensively, creating transition opportunities and aggressively attacking the basket using their height advantage. Branden Gibson, David Seagers, Mahamoud Jabbi, Patrick James and Ronnie Worthen Jr all put in excellent work, playing hard and working together for the victory.
Posted by Max Margulis at 1:20 PM No comments:

Last Tuesday, November 20th, Max's All Stars suffered a tough loss against Team #1 - Ray Shields by a final score of 65-50. A week after lighting up the scoreboard for 100 points, Max's All Stars barely managed to score half that much this week. Corey Orgias, David Seagers, Jason Lewis, Mahamoud Jabbi, Marvin Billups Jr, Noah Levine, Patrick James and Ronnie Worthen Jr battled hard all night, but couldn't get going offensively. The team struggled to move the ball effectively, rebound and finish at the rim. Max's All Stars performed fairly well defensively, especially in the first half, but could not overcome their offensive ineffectiveness. The loss drops Max's All Stars to 4-2 on the season.
Posted by Max Margulis at 1:19 PM No comments:

Max's All Stars made it rain last night, defeating Team #3 - Scott Green by a final score of 100-74. This marks the first time in team history that Max's All Stars have scored 100 points in a single game. Corey Orgias, David Seagers, Jason Lewis, Mahamoud Jabbi, Marvin Billups Jr and Patrick James put forth a dominating effort, offensively and defensively. Seagers set the tone early, scoring 17 of the first 19 points for Max's All Stars. He was on fire! The whole team was! It was easily Max's All Stars' best showing of the season as they attacked the basket, knocked down shots all over the place, hustled on defense, blocked shots and rebounded well. Everyone contributed, grabbing control of the game early and putting together a near-flawless performance. With the win, Max's All Stars improve to 4-1 on the season. 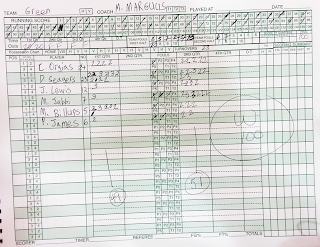 Posted by Max Margulis at 11:32 AM No comments:

In their first game after Hurricane Sandy, Max's All Stars clawed out a victory against previously undefeated Team #2 - Eric Faltraco by a final score of 61-59. In the aftermath of the storm, all four A-Division teams struggled to find enough players for last night's games. Max's All Stars only had 5 players yet again. Mahamoud Jabbi, Marvin Billups Jr, Patrick James and Ronnie Worthen Jr were joined by Super Dave Seagers who triumphantly returned to action after a prolonged absence. Seagers looked rusty early on, but got going in the second half by attacking the basket. He was also very sharp defensively. Max's All Stars started the game down 7-0, but got things under control relatively quickly. Tied at 59 with 9.7 seconds remaining, Marvin Billups Jr drove to the basket, drew a foul and hit both free throws to put Max's All Stars ahead with 4.4 seconds remaining. Team #2 made one last attempt to force overtime, but Max's All Stars got the stop and prevailed. All five players (Seagers, Jabbi, Billups, James and Worthen) fought hard from start to finish, overcame a slow start, some questionable officiating and a lack of depth to earn an important victory and improve to 3-1 on the season.
Posted by Max Margulis at 12:25 PM No comments: