Max's All Stars fell short in the Winter 2013 Riverside Classic Unlimited League semifinals, losing to Team Flipstar by a final score of 49-37. It was an ugly game from start to finish, lots of turnovers, missed opportunities - just downright sloppy basketball. In the early going, Max's All Stars matched Team Flipstar basket for basket, but then things stalled offensively and the deficit went to as many as 11 in the first half. By halftime, Max's All Stars narrowed it down to single digits, but in the second half Team Flipstar again kept pushing the lead up to around 10-12 points. But Max's All Stars would not go gently into that good night, tying the game on a huge Anthony Gill 3-pointer with less than 5 minutes to play. Unfortunately, Team Flipstar went on a 13-1 run to close the game out and advance to the championship. Dave Seagers played a great game, hitting two big 3-pointers during the second half comeback attempt. Patrick James was terrific also, playing aggressive defense while pushing the pace, getting out in transition and drawing fouls. Branden Gibson, Mike Orock and Troy Marcus also played hard. Marvin Jr Billups showed up late in the second half and tried to save the day, but it was not meant to be.
Despite the loss, Max's All Stars have a lot to be proud of. After struggling in the regular season this team came together, won two playoff games and advanced to the Final Four despite a constantly evolving roster. Every game someone new would step up and play well. It is a true testament to the character of each man who represented Max's All Stars.
Posted by Max Margulis at 10:55 PM No comments:

Max's All Stars advance to the Winter 2013 Riverside Classic Unlimited League semifinals by knocking off the #1 seed, Cru Thik, in the quarters by a final score of 68-58. Anthony Gill led the scoring again with 23 points. Dave Seagers hit a number of clutch shots and FTs, finishing with 19. Marvin Billups Jr played great, chipping in 15 of his own. Patrick James continued to dominate defensively and scored 2 points while Troy Marcus (7 points) controlled the boards. Despite being shorthanded, Max's All Stars played hard and kept the intensity up from start to finish. Leading by 10 points at halftime, Max's All Stars let Cru Thik back into the game when they went on an 11-0 run to take a one point lead. But Max's All Stars responded and finished things off. It was a total team effort that led to a big win for Max's All Stars! 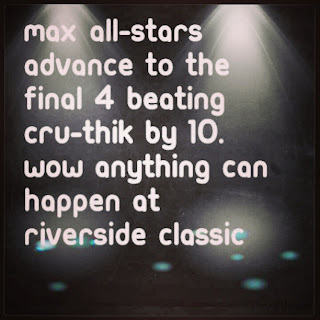 Posted by Max Margulis at 11:54 PM No comments:

On the weekend of March 16th, Max's All Stars traveled to Boston and competed in the 14th Annual Full Court Charity Challenge, reaching the Corporate Division semifinals and finishing with a 4-1 record. The team won their pool easily with three double-digit wins against Cross Insurance (46-36), Summit Partners (45-35) and Ernst & Young (33-11). In the quarterfinals, Max's All Stars had to fight for a win against Instinet. Down three points in the final minute, Derrick Stanton hit a clutch game-tying trey to send the game to overtime, but that wasn't enough and a second OT was needed. Due to time constraints, the second overtime was sudden death and Dave Seagers won the game by forcing a turnover and taking it in for the winning bucket. Final score: 42-40. In the semifinals, Max's All Stars fell against the defending Corporate Division champions, Shire (who featured two members of the Villanova Wildcats 2009 Final Four team - Frank Tchuisi and Shane Clark) by a final score of 33-19. Despite falling short of the championship, Beijon Séduisant Warrington, Branden Gibson, Corey Orgias, Super Dave, Derrick, Patrick James, Reed Morgan and Troy Whittington all played hard and represented Max's All Stars well, continuing a tradition started by Hofstra Club Basketball in 2009. They deserve a lot of credit for their efforts.
It should be noted that all funds went to the Nashoba Learning Group and The Lurie Center for Autism, charitable organizations which provide education, therapy and other services to individuals afflicted with autism. Max's All Stars is proud to contribute in some way to such an important cause.
Also, shout out to Kevin Young and Kevin Johnson for making the trip and supporting the team!
Posted by Max Margulis at 11:25 PM No comments:

Max's All Stars advance to the Winter 2013 Riverside Classic Unlimited League quarterfinals with a first round playoff win against Hells Bells by a final score of 77-61. Despite being shorthanded, Max's All Stars kept the intensity up all game long - leading from start to finish. Anthony Gill put in a monster effort - scoring 37 points! He was all over the place, doing the little things and scoring at will. Dave Seagers played hard and was the second leading scorer with 15 points. Patrick James matched his jersey number with 6 points while playing suffocating defense. Troy Whittington showed up midway through the first half and chipped in 11 points. Corey Orgias (5 points) and Mike Orock (3 points) contributed as well, controlling the boards and dominating defensively. It was total team effort that led to a big win for Max's All Stars!

Posted by Max Margulis at 11:05 PM No comments:

Max's All Stars drop to 2-3 in Riverside Classic

Max's All Stars fell to 2-3 in the Winter 2013 Riverside Classic Unlimited League, losing to Cru Thik by a final score of 50-40. Down by 10 points at halftime, Max's All Stars battled back and cut the deficit to 2 points midway through the second half. Unfortunately, despite playing better in the second half, Max's All Stars dug themselves too deep a hole in the first half and could not complete the comeback. Turnovers, missed free throws and struggles on defense contributed to the loss. Anthony Gill, Branden Gibson, Corey Orgias, Marvin Jr Billups and Patrick James were joined by two fill-ins, Troy Marcus and his cousin, Jerome Alexander (shoutout to Kevin Young for recruiting Marcus and supporting the team) - they all battled hard, but fell short in the end. The loss drops Max's All Stars record to 2-3 with the playoffs starting next week.
Posted by Max Margulis at 10:58 AM No comments: